Bayliner is the world’s best selling fiber glass boat with a wide selection of models to suit every lifestyle. From runabaouts to fishing boats to luxury day boats, Bayliner has your perfect boat. Huge list of standard features and optional equipment allow you to completely customize. Read below the reasons you should consider buying a Bayliner for your next boat… read more

Bayliner’s are built brilliantly simple; don’t fix what isn’t broken! For years, Bayliner has stuck to doing one thing exceptionally well and that’s simplicity of design. All too often new boat buyers get caught up in creature comforts and expensive features that they then forget to consider what features will be functional on the water. This is especially true for new boaters, overwhelmed by countless boat types and option combinations. Bayliner specializes in making an exceptionally easy to own and easy to operate boat that satisfies new & experienced boaters alike. And Bayliner Boats come packaged with a trailer and engine making it easy to buy without worry.

Bayliner’s signature design on all of their models, brings the beam (the max width of the boat) toward the bow of the boat, making for a longer cockpit and deeper bow. It also gives the boat a larger footprint in the water, which when combined with the depth of the v-hull, give Bayliner’s a smooth and drag free running surface. This improves handling, planing and safety. Additionally, bringing the widest part of the boat forward, Bayliner maximizes storage space as well as room to move about the bow and cockpit. This, combined with higher than average cabin depth makes for deeper & higher capacity storage compartments as well as added safety from being deeper in the boat.

Offering a quality boat that is affordable is difficult enough and something that Bayliner has built themselves on for years and continues to do better than any manufacturer in their segment. Going above & beyond the initial sale by providing the very best warranty coverage available is something else entirely.

Seven consecutive CSI awards. An unprecedented feat among value segment brands. And these awards aren’t driven by advertising volume in a boating publication. These are consumers just like you, voting with their hard-earned dollars. This gives added credence to the loyalty Bayliner owners have for their boats like little else can. These awards are the coveted Marine Industry Customer Satisfaction Index (CSI) Award from the National Marine Manufacturers Association. No fluff. Just the right stuff.

Brunswick, the parent company of Bayliner Boats stands alone at the top of the industry as largest boat manufacturing group in the world. Brunswick owns multiple industry segment leaders such as Mercury, Boston Whaler, Harris Pontoons, HeyDay Inboards and many more. This industry domination means more resources to put into manufacturing the perfect boat for the right purposes. In Bayliner’s case, that’s making the best boat for the average boater at the very best price.

The world’s number one selling runabout for years, Bayliner is the industry leader in engineering the enjoyment of simplicity. Town & Country Marine is the exclusive Bayliner Boats dealer for The Kawartha’s, Haliburton, Trent Lakes, Peterborough and Toronto in Ontario.

At a glance, Bayliner has among the cleanest designs and the most classic styling of any boat in it’s class. Digging deeper, Bayliner Boats are designed to be easy to afford, maintain and most importantly, easy to own. After years of leading the entry-level segment, Bayliner has listened to and acted upon the wants and needs of boating families around the world, with new models, options and features that make your summer boating experience all about enjoyment.

Traditionally, the Bowrider (or BR) series is the tried-and-true of the Bayliner lineup. Available at 16, 17 & 18 feet LOA’s, the sporty & light bow cuts through water and reduces weight for clean planing, rapid hole shots and responsive handling.The BR series is only available with outboard Mercury Engines.

The VR series is the new line of Bayliners that have had enormous success in our area and worldwide. Available in both I/O & OB power from Mercury & Mercruiser the VR series allows boaters to truly customize their vessel with premium features such as docking & underwater lights, SeaDek marine flooring and much more.The VR series is a hybrid of the bowrider and deck boat in that it has a wide bow for more usable space like a deck boat, while making the “V” of the hull deep to replicate the handling of a traditional BR. The VR boats are available in 18(VR4), 20(VR5) & 22(VR6) feet.

All new for 2019, the DX Series reimagines the relaxed and conversational layout and wide, straight bow shape of a deck boat while incorporating a deeper V-hull than most deck boats. The DX series deck-boats is available in a 20 foot OB or I/O.

The DB series desembles a more traditional bowrider layout with a wider & straighter bow than a BR. This of course allows added seating and storage in the bow while keeping the functionality of a BR hull. With added width and a less aggressive V-Hull, the DB series is a slightly more stable option.

The E (Element) series, available in 16, 18 & 21 feet reinvents what a deck boat can be. The patented M-Hull makes for unrivalled stability and balance with automotive like handling making it a safe & easy option for new boaters .

The F Series, also available in 16, 18 & 21 feet has the Bayliner patented M-Hull but with a fishing-first design. The centre console layout & tons of added fishing features make this an attractive option for fisherman who want a safe, simple and stable vessel to cast lines from.

The XR7 is Bayliners biggest boat and is a definite big-time entertainment boat for those of you with large crews. Featuring the M-hull and tons of day boat features like a sink, head, bimini and more, the XR7 is the perfect party boat.

We will be closed from December 17th until January 9th for the holidays. Sales team is available for private viewings, so go ahead and browse some boats! To get in touch with us, click the link below so we can contact you. 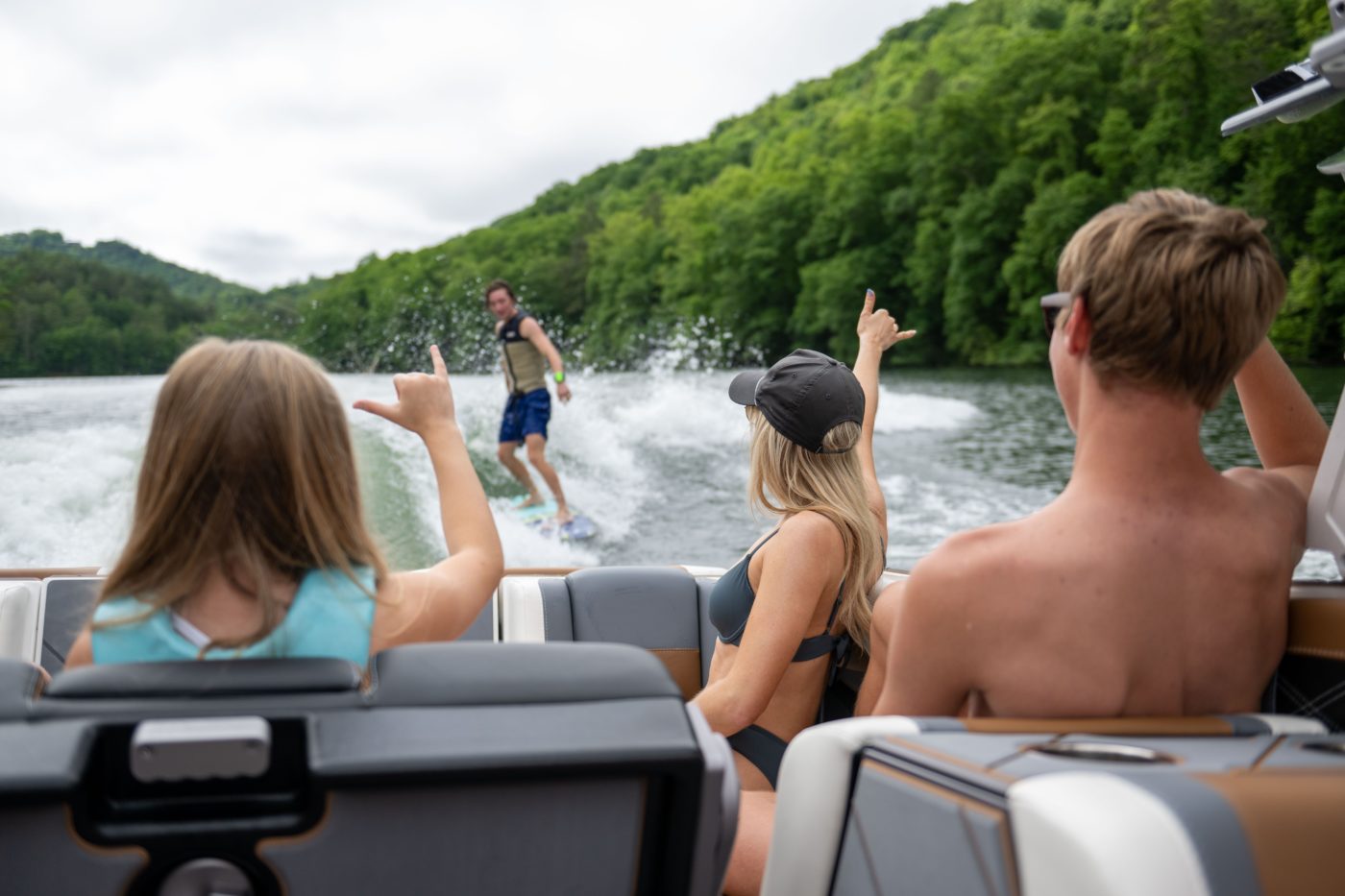